The New Arrival (also known as Pinga is Born) is the third episode of the first series of Pingu.

While Pingu is reading a book, Mother and Father notice that their egg is displaying signs that it may be close to hatching. As they take turns sitting on the egg, the kettle starts whistling and the phone starts ringing at the same time. Pingu can't decide which one he should get first, so Mother takes care of it. She goes back over to Father when a small beak pops out of the egg and pokes him in the rear, causing him to jump up in surprise. Mother frantically orders Father to call the midwife.

The midwife soon arrives and begins examining the egg with her stethoscope. Pingu tries to see what is happening but his parents push him aside and tell him to keep out of the way. The midwife carefully removes the shell of the egg while Pingu desperately tries to get a peek. Once the shell has been completely removed, Mother and Father allow Pingu to see his newborn sister. They thank the midwife for her help as she departs.

Pingu's parents are delighted with their new baby and decide to name her Pinga. Father sets up the camera and they all take a family picture.

The egg starts to hatch

Rare Photo (With Robby)
Add a photo to this gallery 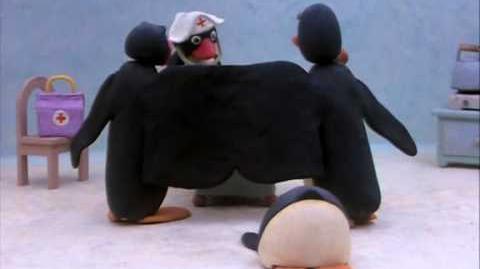 The New Arrival
Restored Version
Add a photo to this gallery
Retrieved from "https://pingu.fandom.com/wiki/The_New_Arrival?oldid=28505"
Community content is available under CC-BY-SA unless otherwise noted.