Steiff is a German-based plush toy company. It was founded in 1880 by Margarete Steiff, who was later assisted by her brother Fritz.

They released two plushes of Pingu and Pinga, and an other Pingu plush, with Pingu holding a teddy bear, for it's 20th Anniversary, with only 1500 produced, that were exclusuvely for Japan in 2000 . 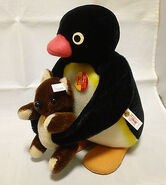 Retrieved from "https://pingu.fandom.com/wiki/Steiff?oldid=18436"
Community content is available under CC-BY-SA unless otherwise noted.