Rock Hopper Penguin (also known as Pen-Pen) is a character from Pingu in the City. He is one of Pingu's new friends.

His first major appearance is in Pingu, becomes a bread making master when he asks Pingu to play soccer, in which he relents and plays with him for a bit, until he remembers about the bread he made, in which he tags along and helps Pingu cook it, only to find out that Chef Fred was stuck in it.

Rock Hopper Penguin appears to be a cheerful, fun-loving penguin.

He looks similar to most penguins, but he has an orange beak, and has yellow eyebrows (making him look like a Yellow Plume Penguin or a Macaroni Penguin, also known as a Golden Haired Penguin). 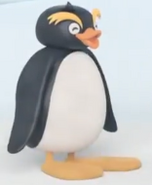 Add a photo to this gallery
Retrieved from "https://pingu.fandom.com/wiki/Rock_Hopper_Penguin?oldid=26492"
Community content is available under CC-BY-SA unless otherwise noted.