Robby the seal  is Pingu's best friend, he and Robby first met in Pingu goes Fishing. He also appeared to have tagged along with Pingu when he moved to the city.

Not so much is known about Robby's background.

Robby first met Pingu whilst he out fishing, but, they did not at first get along. Robby kept stealing and eating the bait Pingu was using to fish and tricked him into thinking he was collecting lots of fish when it was the same one. Eventually, Pingu catches Robby and pursues him and stops him from escaping back into the sea by covering up the two holes in the ice. Robby tries to escape, but he hurts his flipper and Pingu felt regretful so he comforts him, which causes Robby's flipper to heal.

Recognizing the goodness in Pingu's soul, Robby returns his fishing pole and rewards his sensitivity with a large fish. Pingu, in return, gives Robby a piece of his bait to eat and the two of them became best friends.

Robby is full of energy and enthusiasm for whatever he does and is always eager to inspire Pingu to join in with his activities. Robby can also be a bit of a prankster and can sometimes cause trouble, which means "double trouble" when he is with Pingu. He can get himself in comical situations. 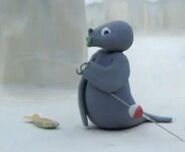 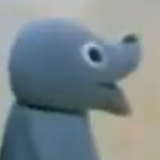 Pingu and Robby in "Pinga Has Hiccups" 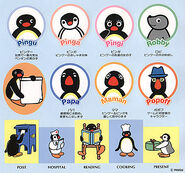 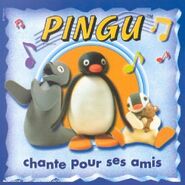 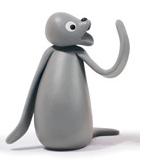 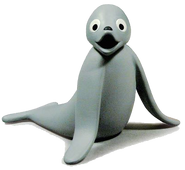 Add a photo to this gallery
Retrieved from "https://pingu.fandom.com/wiki/Robby?oldid=27440"
Community content is available under CC-BY-SA unless otherwise noted.