Punki sometimes known as Punky[1] and Senior Pengerotti in The Adventures of Pingu, is one of Pingu's grown-up friends.

Punki is a party entertainer and opera singer. He is often seen at birthday parties for penguin chick, playing the barrel organ and giving a very jolly and excited greeting of opera when he has a parcel delivered to his door.

We first see Punki when Pingu delivers a parcel to him. Pingu instantly discovered how over excitable he is, when opened his front door and nearly knocked Pingu off the door step and flattened his beak.

Punki used to live on the top floor of an igloo complex, but in Season 5, he moved into a single story igloo, possibly due to him flinging open his door on other's faces when he greets them in his jolly way.

He is a very jolly and excitable. He likes to entertain people at parties and often greets one in very operatic way.

He is very short and has a very funny tuft on his head. He often wears colourful trousers to let everyone know who he is. His trousers come in many different colours and patterns, but his favourites are the striped ones with big red buttons. 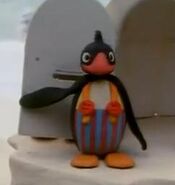 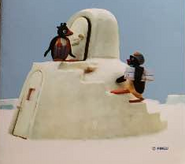 Retrieved from "https://pingu.fandom.com/wiki/Punki?oldid=27870"
Community content is available under CC-BY-SA unless otherwise noted.