Pingu the Photographer is the eleventh episode of the second season which was first broadcast on March 9, 1993.

Pingu is taking photographs with his camera. He photographs various parts of the landscape with Robby in some of the shots. They then spot a hot-air balloon drifting past, and Pingu snaps that too. A photojournalist then arrives and also snaps the balloon, with Pingu standing in the foreground.

With a full roll of film, Pingu goes home, and Father takes him to the photo-shop to get the film developed. Unfortunately there’s nothing on the film, as Pingu has forgotten to take the lens cap off the camera. Father escorts a misreable Pingu home. As Father comforts Pingu, Mother and Pinga arrive home with the newspaper, which shows a big picture of Pingu and the balloon on the front page. Pingu woops for joy and Father frames the picture still in its newspaper article which he then hangs over the wall. Pingu and his parents then stand in front of the picture and Pinga photographs them, not forgetting to take off the lens-cap this time. 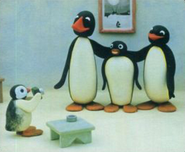 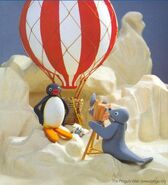 Another Rare Photo
Add a photo to this gallery
Retrieved from "https://pingu.fandom.com/wiki/Pingu_the_Photographer?oldid=24497"
Community content is available under CC-BY-SA unless otherwise noted.