Pingu at the Funfair

Pingu the Babysitter is the seventeenth episode of the second season which was first broadcast on July 27, 1993.

Pingu's mum is taking her sister out for the day, so Pingu has the job of babysitting her twins babies.

After Pingu's mum and aunt leave, the twins start acting troublesome. They throw their pillows at Pingu's head, one crawls off and pulls the tablecloth off the table, nearly breaking a vase which Pingu saves and the other starts playing about with the frying pan on the stove.

Pingu eventually gets them both into their highchairs and feeds them. While he’s feeding one. the other is crying for more and vice versa. Eventually they both stop crying and Pingu checks their nappies. Luckily only one has a dirty nappy so Pingu changes it and tucks them both back into bed. He then sits down to read a good book, but they soon both start to cry again. Pingu temps them with their teddy bears but they don’t want them, so he rocks them back to sleep.

Pingu goes back to his book. He is just starting to enjoy it, when the twins start crying again, so he has to rock them to sleep again. Then he has an idea; he ties one end of a string to the bed and the other end to his foot, so now when the twins start crying, he can wiggle his foot and rock the bed without having to get up from his chair which works like a charm. When Pingu's mum and aunt come back, the twins are fast asleep and Pingu is so tired with moving his foot to rock the bed, that he is just starting to drop off too. Mum is so pleased with Pingu for doing such a good job, that she gives him a great big hug. 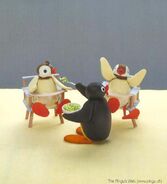 Rare Photo
Add a photo to this gallery
Retrieved from "https://pingu.fandom.com/wiki/Pingu_the_Babysitter?oldid=26148"
Community content is available under CC-BY-SA unless otherwise noted.