Pingu on the School Excursion

Pingu's Visit to the Hospital

Pingu and Pinga at the Kindergarten

Today, Pingu's school is going to see a sculptor, who is carving a giant blue whale. On the way, Pingg decides to have a snowball fight with Pingu. When Pingu throws his snowball, it misses Pingg and instead hits Mr. Peng-Chips in the face, who gives Pingu a stern telling-off.

Soon the class arrive at the sculpture. As they all watch the sculptor working on the mouth piece of whale, Pingu and Pingo wonder off on their own to look round the other side of the sculpture. When Mr. Peng-Chips goes off to look for them, Pingg decides to help the sculptor and naughtily carves a dent in the whale's belly. This makes the sculptor very cross.

On the other side of the sculpture Pingu and Pingo are climbing the scaffolding, but they do not go unnoticed. When Pingo climbs up to the top of the tallest pole, Mr. Peng-Chips comes along and makes him slide back down again.

Later while the sculptor is telling Mr. Peng-Chips how Pingg vandalised his sculpture and why it is important to sculpt it accurately, Pingg has climbed ontop of it and is balancing on the whale's tail. He gleefully bounces up and down on it and breaks a bit off. Pingg just manages to save himself from falling off by grabbing on to the edge of the remaining part of the tail, leaving him precariously hanging on for dear life. While the sculptor looks angrily up at the increased vandalism on his artwork, Mr. Peng-Chips wonder how they are going to save Pingg before he falls and hurts himself. Pingo fetches a long pole from amongst the scaffolding to try and help Pingg down, but his flippers can not get a grip. Meanwhile Mr. Peng-Chips has climbed up on top of the sculpture and is trying to coax Pingg to edge his way across but he is too scared.

By now, Pingu has come up with a plan; using some the poles and a tarpaulin, he and the rest of the class build a makeshift slide for Pingg to come down on. When everything is ready, Pingg releases his grip on the whale's tail and slides down to the bottom of the slide safely. Once the rest class have pacified Pingg and he thanks them for saving him, they suddenly realise that poor old Mr. Peng-Chips is still stuck up on top of the sculpture. The class can not help laughing though. 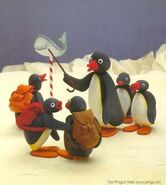 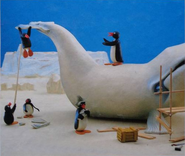 Add a photo to this gallery
Retrieved from "https://pingu.fandom.com/wiki/Pingu_on_the_School_Excursion?oldid=25632"
Community content is available under CC-BY-SA unless otherwise noted.