Pingu at the Funfair

Pingu at the Funfair (sometimes known as Pingu at the Fairground and Pingu goes to the fair in Pingu and Friends from 1998) is the sixteenth episode of the second season which was first broadcast on July 13, 1993.

Today, Pingu and Pinga are going with their parents to the funfair for the day.

When they arrive, the fairground is in full swing: there are balloons, ice-creams, candy floss, games, stalls and rides as far as the eye can see. Mr. Peng-Hoven is also there playing his barrel organ and Pingu drops some money into his hat for his music. Pingu and Pinga then rush up to the candyfloss machine; Pinga has a blue and Pingu has pink which only costs one coin for Dad to pay.

At the “Hit the Tins” stall, Pingu has a go and knocks all the tins down in all his three throws, and receives a lollipop as a prize. Then Pinga has a go, but she throws before the stallholder has completely finished putting back the tins. The ball misses, bounces off the backboard onto the stallholders head, and then into the tins, knocking them all down. The stallholder does not like this and loses his temper in front of Pinga, which frightens her off. They move on quickly, leaving the angry stallholder still blowing his top. Pingu and Pinga then go up to the ice cream kiosk and have a strawberry, chocolate and vanilla mix cornett each.

The family then go over to the "Test Your Strength" machine. Pingu tests his strength but gets Rank: Buttercup. While mum has her go and ranks: Hercules, Dad sneaks off to the sweet stall buys a heart shaped candy pendant for her. When the others come over to join Dad, he puts around Mum neck and Pingu and Pinga get given twisty candy stick each.

Pingu and Pinga then have a ride on the Merry-Go-Round and afterwards, Pingu rides on the swings. Mum and Dad are concerned about how high he is swinging and so when Pingu gets off, he feels rather queasy, so much so that he can not eat anymore candyfloss with Pinga on the way home. Just as they are about to leave, Pingu and Pinga each get a balloon, but Pingu is feeling so dizzy that misses getting hold of the string and the balloon floats away, so Pinga lets hers go too. This makes Pingu feel a bit better, and they all have a jolly good laugh. Then they all set for home as sun sets over the horizon. 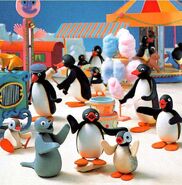 Rare Photo
Add a photo to this gallery
Retrieved from "https://pingu.fandom.com/wiki/Pingu_at_the_Funfair?oldid=26119"
Community content is available under CC-BY-SA unless otherwise noted.