Pingu at the Doctor's

Pingu at the Doctor's is the first episode of the second season which was first broadcast on November 3, 1991.

While Mother has gone out, Pingu and Pinga decide to play being dentists. However when Pingu gets out the hammer and chisel to check Pinga's teeth, she runs away and he chases her around the igloo. Then during this chase, a table gets knocked over and Pingu rams his beak into it, causing it to bleed! Pinga bandages her big brother's beak up and takes him to see the doctor.

Because of their age differences, the doctor at first thinks that Pinga is the patient and takes her inside. She then explains to the doctor that she has brought her big brother to see him, so the doctor shepherds Pingu into his surgery straight away, much to the other patients displeasure. The doctor takes the bandage off Pingu's beak and readies his dental tools, but Pingu is terrified at the sight of them and runs away. Pinga and the doctor chase him round the surgery, until Pingu runs back inside and locks the door behind him. It makes the patients laugh to see the doctor grumbling at being locked out of his own surgery.

Pingu then rings up his Mother to come and be with him. Luckily Mother has just come home who and drives to the doctor's as quickly as she can. She calls through the door to let her son know that she is there and Pingu unlocks and jumps into her wings. Then Pingu sits back down in the dentist's chair and Mother stands behind him, with her wing on his shoulder to comfort him while his beak is being treated. The doctor cleans up Pingu's beak and  puts a brace on it to let it heal for a few days. While this is going on Pinga asks for her beak to be checked too, but the doctor just gives her a lollipop to keep her quiet. She then tries again, to which the doctor just shoves another lolly into her mouth. Pinga kindly cleans the lollipop for Pingu and gives it to him just as they are about to leave. Then as two young penguins wave goodbye to the doctor and his other waiting patients, Mother drives them both back home. 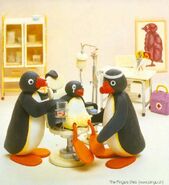 Another Rare Photo
Add a photo to this gallery

Retrieved from "https://pingu.fandom.com/wiki/Pingu_at_the_Doctor%27s?oldid=27645"
Community content is available under CC-BY-SA unless otherwise noted.