Pingu and the Toy

Pingu and the Toy is the sixteenth episode of the third season which was broadcast on June 27th, 1996.

When Pingo gets a new toy wind-up fire engine and won't share it, Pingu decides to get one too. However he only has an old button in his piggy bank and no money, so he asks Grandpa to buy him one. On leaving the stall where the fire engines are being sold, Pingu doesn't see his Mother arrive to buy him one too. Sadly, Pingu's toy lasts for even less time than Pingo's does before breaking, leaving Pingu in a foul mood. As soon as Pingu sees the one that his Mother bought for him, he ungratefully chucks it into the bin where the toy breaks like the others and plays with his building blocks instead. 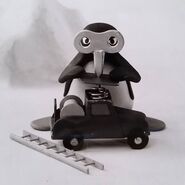 Another Rare Image
Add a photo to this gallery
Retrieved from "https://pingu.fandom.com/wiki/Pingu_and_the_Toy?oldid=27341"
Community content is available under CC-BY-SA unless otherwise noted.