Pingu and his parents are eating dinner one night, but Pingu isn't happy because he has to eat vegetables. When Mother offers Pingu some of her beetroot, he refuses and splatters it all over her chest. Father becomes angry and rebukes him, but Pingu takes no notice and starts rocking back and forth in his chair until he falls backwards, taking the tablecloth with him. All the food goes everywhere and Pingu's parents become furious. After Mother spanks him, Pingu leaves the igloo crying, thinking that his parents no longer love him. Once outside, he yells at his parents in a fit of anger and walks off into the night.

Back inside, Pingu's parents are enjoying some quiet time when Mother notices how late it is getting. She points this out to Father, who is certain that Pingu will be back soon. Meanwhile, Pingu becomes frightened when he realizes just how scary the outdoors can be at night. He nearly gets crushed by falling ice, and encounters several scary-looking mounds of ice which look like ugly monsters. Terrified, he runs away and waits for help inside a small cave.

Back home, Mother and Father are very worried that Pingu has still not returned and decide to go look for him. Mother walks ahead and calls for Pingu while Father drives close behind on his tractor sledge. Pingu hears his mother's calls and replies. Happy to see her son, Mother grabs Pingu and hugs him. Father finds them together and apologizes for what happened earlier. They drive home, Mother feeds Pingu some soup and they go to bed happily. 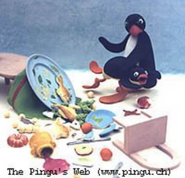 Retrieved from "https://pingu.fandom.com/wiki/Pingu_Runs_Away?oldid=28398"
Community content is available under CC-BY-SA unless otherwise noted.