Pingu Plays Fish Tennis (or just Fish Tennis) is the ninth episode of the first season.

The episode begins with Pingu sitting on a sled beside his house, asleep. Robby the seal passes by, sees Pingu asleep, and jokingly attacks Pingu with snowballs. Pingu is enticed immediately to join an acrobatic game in which they pass a large, red fish back and forth to each other. Pingu then tosses it high into the air, and the fish lands on Pingu's head, it's mouth trapped over his head. Robby, briefly abandoning his joking around, aids his relatively new friend by removing the fish from Pingu's head.

They then play a tennis-style game using the fish. However, the fish is eventually caught on the rope and, after a futile attempt to retrieve the fish, Pingu retrieves it using a pair of ice-stilts placed conveniently by his igloo. Robby then divides the fish into two equal parts, which they share and eat together. 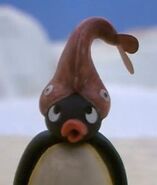 Retrieved from "https://pingu.fandom.com/wiki/Pingu_Plays_Fish_Tennis?oldid=27596"
Community content is available under CC-BY-SA unless otherwise noted.