Pingu Looks After the Egg also known as "Pingu Helps with Incubating" is the second episode of the Pingu series. It was broadcasted in the UK on September 9, 1991.

Pingu's family has an egg and while his parents do the laundry Pingu has to sit on it. At first, he is proud and happy to help but he soon gets bored and gets up and starts listening to the song: "Woodpeckers From Space" ("The Pingu Dance" in the re-dub). Pingus dances and other steps, but the egg suddenly sprouts a leg and starts to dance around the house. When Pingu notices this he tries to stop things and catch the egg before his parents find out, trashing the igloo in the process. Pingu's parents, eventually noticing the commotion and finding out what's happening, rush over to help. Father catches the egg and Mother turns off the record. Mother finds Pingu hiding in a cupboard beneath the record player, afraid his parents would be angry at him. They are not and Mother hugs him and Pingu kisses her on the cheek. Mother and Pingu clean up the igloo and Father sews him a hat for a great job taking care of the egg. 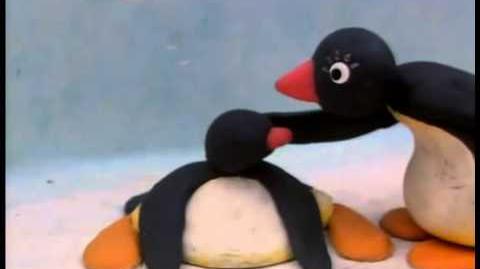 Pingu Looks After the Egg
Restored Version
Add a photo to this gallery
Retrieved from "https://pingu.fandom.com/wiki/Pingu_Looks_After_the_Egg?oldid=27494"
Community content is available under CC-BY-SA unless otherwise noted.