Pingu Goes Away (Sometimes known as Pingu's Outing) is the tenth episode of the second season which was first broadcast on March 2, 1993.

It’s 5 o'clock in the morning and Mother is putting things in a pack for Pingu. She goes to wake him, and tells him to be quiet so as not to wake Pinga. Pingu goes to the bathroom, while Mother makes him breakfast. When Pingu comes out of the bathroom he lets the door slam behind him, which wakes Pinga up. Pinga cries, and is comforted by Father. Pingu eats his breakfast and leaves, carrying his pack. The family wave him goodbye. On his journey Pingu asks the way from an artist, who is out painting the sunrise, and the baker, where he’s given a free pastry. A delivery man on a motorised sledge passes him, and a package drops off the sledge. Pingu calls out, and the delivery man comes back for the package, and then gives Pingu a lift. He’s dropped off at a signpost where he has to go one way and the delivery man another. When he reaches his aunt’s home she greets him at the door, and he eats nearly all of the large meal she’s prepared for him. He’s nearly asleep on his feet, so his aunt suggests he go to bed, but he’s feeling homesick. His aunt offers him a doll to take to bed with him but he doesn’t want it, so she phones Mother. When he speaks to Mother Pingu immediately cheers up, as Mother has put his teddy bear in the pack he brought with him. He goes to bed, and falls asleep during the story his aunt is reading to him, cuddling his teddy.

Pinga says "Goodbye" to her brother

Pingu and a teary-eyed Pinga 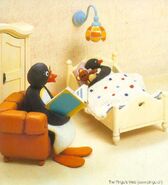 Pingu brushing his teeth in that episode.
Add a photo to this gallery
Retrieved from "https://pingu.fandom.com/wiki/Pingu_Goes_Away?oldid=24710"
Community content is available under CC-BY-SA unless otherwise noted.