Pingu and the Letter

Pingu finds Pingo and Robby playing badminton together. Feeling a little left out of the fun, Pingu asks if he can have a go, but neither Pingo or Robby wants to sacrifice their turn for him. Pingu finds that they have also been fishing, but Pingo snappishly tells him not to touch any of their catches. This makes Pingu feel even more left out.

Then the shuttle cock gets stuck on top of a column of ice. Pingu climbs onto the column to rescue the shuttle, but to pay Pingo and Robby back for their selfishness, he tells them he will only let them have it back if they give him their basket of fish. Pingu throws down one end of a rope down to Robby and Pingo so that he can pull up the fish, but Pingo is not going to let him get what he wants so easily and he whispers his plan to Robby. The seal drops into a fishing hole and then comes back with a small crab. Pingo puts the crab into his basket and hides it amongst the fish. Pingu then hoists up the basket of fish and lets his friends have their shuttle cock back. From on top of the column, Pingu reaches into the basket for a fish and gets his wing nipped by the crab. Shock mixed with pain, Pingu stumbles backwards and falls off the column to the ground. Pingo laughes out loud, but Robby suddenly feels bad about what has happened and rushes over to see if Pingu is alright.

Robby then goes up the top of the column with Pingo to rescue their fish, but the seal is now starting to feel very bad about giving Pingu the cold shoulder all day. Pingo and Robby tuck into their catch of fish until they are only down to one odd one. The two of them look down to find Pingu sobbing beneath them. Now both Pingo and Robby feel guilty about leaving Pingu out of everything. To make up for their selfish behaviour, they let Pingu have the last fish and all three of them play badminton together like good friends should. 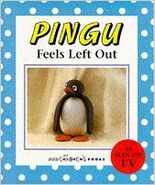 Rare cover image
Add a photo to this gallery
Retrieved from "https://pingu.fandom.com/wiki/Pingu_Feels_Left_Out?oldid=25552"
Community content is available under CC-BY-SA unless otherwise noted.