Jealousy
Pingu Delivers the Mail (sometimes known as Pingu Helps to Deliver the Mail) is the fifth episode of the first season of Pingu.

Pingu is eating breakfast while his father is preparing for work, Pingu was going to help with his mail job, and he goes along with each other, they pass by a penguin named Mrs. Peng-Sniff, who Pingu blows a raspberry Noot Noot at.

Pingu shakes hands with The Post Master as Pingu's father brings out his tractor sledge from the back of the post office, Pingu throws the mail into the back, except the last parcel under his father's instruction. They go to Pingo's house to deliver his parcel, Pingu's Father lets him wear his mail hat to show that he is a mailman, once Pingu rings the doorbell, Pingo's Father answers, but Pingu asks for Pingo, he tosses him his parcel, then Pingo drops it on the ground, and it bounces a few times until it reveals there is a ball inside of it.

Pingu then gives another penguin a parcel, but he doesn't answer until he realizes he uses his window instead of his door to answer, Pingu then delivers a parcel to a penguin named Punki, but he gets hit in the face due to Punki's way of answering people, it wasn't until his second attempt that he managed to get his parcel delivered.

The last parcel is full of lollies for Mrs. McGreedy's children, and after that Pingu tells The Post Master about the day, then Pingu and his Father return home, Pingu messes around in a backyard, only to find Mrs. Peng-Sniff wacking a carpet with what appears to be a picture of Pingu on it using a carpet beater, Pingu then realizes what would've happened if he let himself be seen so he sneaks by her, Pingu then asks his father if he can wear the mail hat one last time, so he lets him, and Pingu returns home in his Mother's arms. 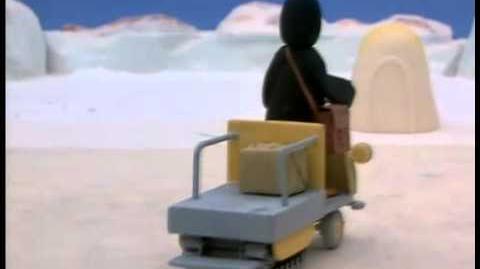 Pingu Delivers the Mail
Restored Version
Add a photo to this gallery
Retrieved from "https://pingu.fandom.com/wiki/Pingu_Delivers_the_Mail?oldid=27829"
Community content is available under CC-BY-SA unless otherwise noted.