Pingu at The Wedding Party

Pingu at the Wedding Party (also known by its home video title A Very Special Wedding) is a 1997 television special featuring the Swiss character Pingu. It was originally broadcasted on RTSI in 1997, and was restored and released on VHS and DVD in the UK in 2004.

Pingu is helping Father deliver the mail. Pingu wakes up a penguin to deliver a parcel, but he’s puzzled to receive it. Then his neighbour comes out and says it’s for her, so Pingu grabs the parcel back and gives it to her. The first penguin is annoyed and goes back inside, slamming the door of his igloo behind him. Father then shows Pingu that they’ve got a letter, and when they get home Pingu gives it to Mother to open. Mother is delighted to get the letter, as it’s an invitation to a wedding. A photo dropped onto the floor when Mother opened the letter, and Pingu picks it up. It is a picture of the happy couple, and the groom-to-be is green and a friend of Mother and Father. Pingu shows the photo to Father, who gets out Mother and Father's wedding album with the green penguin friends and shows it to Pingu and Pinga. There are a lot of green friends in the pictures.

Mother and Father go to get a present, leaving Pingu and Pinga at home playing weddings. They’re shown a remotely operated Roomba, which they decide to get, and take it home. The cleaner and remote are put on the table, and Pingu is intrigued. Mother then comes in and tells Father that she needs a new hat, so they go out to get one, and leave Pingu and Pinga alone at home again. Pingu cannot resist the lure of the remote control so he touches the control stick, and the parcel moves. He touches the stick again, and the parcel moves again. Pinga comes over to watch, as Pingu pushes the stick on the remote control full forward. The parcel spins round and round, then takes off and hovers like a helicopter. Pingu finds that moving the stick from side to side makes the parcel move from side to side, and pulling the stick back makes it land.

Unfortunately, when the parcel lands it over-balances and falls off the table, landing upside down and getting dented. Then Grandfather arrives. Pingu and Pinga explain what has happened. Grandfather gives the letter he’s carrying to Pinga to hold, picks the parcel up and puts it back on the table the right way up. Mother and Father are unaware of all this as they’re busy choosing their hats for the wedding. As they arrive home with their new hats Grandfather is just leaving. He shows them the invitation and goes off. Pingu is worried about the dent in the present, but Mother and Father don’t seem to notice.

On the day of the wedding Mother helps Pinga to get ready, Pingu is still worrying about the dent in the present and Father is cleaning the sledge. Grandfather is about to leave his home when he remembers that he needs to take his wedding present, and goes back inside to get it. He then gets on his skis and leaves. Pingu and the rest of the family are about to leave when they see Grandfather on top of a nearby hill. Grandfather sets off down the hill toward them but falls, breaking his skis and hurting his foot. After a visit to the hospital they all set off for the wedding; Father is driving the sledge with Mother, Pingu and Pinga as passengers, the present is being towed on its own little sledge and Grandfather, in a wheelchair with his foot in plaster, is also being towed.

When they arrive at the wedding everything is ready, and the guests who have arrived are chatting. Father and Grandfather chat to some of the other guests, and Mother and Pinga go to coo over an egg in a cradle being looked after by its mother. Pingu spots Robby, who is there as photographer and is polishing the camera, which is on a tripod. Robby taps the camera and the tripod collapses, which makes Pingu laugh. Pingu is looking at some flowers when he’s called over by one of the green penguin family. She introduces Pingu to her son, Pingj who is about Pingu’s age. He greets Pingu by making rude noises, swaying from side to side, slapping Pingu on the back and shaking hands.

As it nears the time of the wedding, they all go to anxiously look out for the groom, who hasn’t yet arrived. The minister keeps looking at his watch. Then crying distracts them; the egg has hatched, and they all go to look at the baby. Meanwhile, the groom is rushing to get to the wedding on his motorised sledge, grabbing a bouquet from a flower stall as he goes past. Pingu is called over by Pingj, and they go and look at the cake, Pingj then naughtily samples the cake, and Pingu joins in, but he patches it up so it’s not so obvious what has happened to it. Then the bride spots the groom and the others turn to look. The groom is momentarily distracted when his tie covers his eyes, causing him to crash into a block of ice, which sends him and the bouquet flying. He ends up sitting on the ice next to the bride, who catches the bouquet as it bounces off his head. They all applaud.

All the attendees clap for the newly married couple when the ceremony ends, but Pingu and the green penguin's son then celebrate in their own way; they had sneaked off before the end and are now playing a vague tune of "Here Comes the Bride" on the horn and track of the crashed sledge. Glasses are raised to the bride and groom, and the cake is cut. Grandfather is puzzled when he finds a big hole in his piece of cake. Pinga gives the bride a flower, the groom waves a rolling pin he has been given, and the bride shows off some pictures drawn earlier by Pingu and Pinga.

The presents are then unwrapped, and Pingu’s father tries to show the bride and groom how the vacuum cleaner works, but nothing happens when he pushes the control stick forward or back. He waggles the stick about and the vacuum bleeps, and rotates slightly. Pingu is worried. Father gives the remote control a shake and then turns it upside down and bangs it. The vacuum cleaner goes absolutely haywire, jumping in the air, turning about, hooting and then rushing around with its arms out, waving a carpet beater, to which it begins causing massive chaos: It swings Grandfather around on the wheelchair, then the arms and beater get put away and the suction hose is deployed. Everyone rushes to get clear, but there is nowhere safe to be away from the vacuum. It sucks up the bride’s bouquet, and then the groom tries to fend it off with a stick. The cleaner puts the hose away, and out come the arms with the beater again. Father attempts to control it with the stick on the remote control, with little effect. The cleaner chases Pingu, who is rescued in the nick of time by Pingj. The cleaner then grabs the camera tripod, and Robby tries to pull it away. The bottom of the leg comes off the tripod and the cleaner abandons it.

The cleaner waves the beater about and opens and closes the gripper on its other arm. Father again waggles the control stick, and then the groom pushes a button on the remote control. The vacuum puts its arms and carpet beater away, then gets out a propeller device from its top and takes off. It makes several low passes over tables and hiding guests, and then just misses Father. Father drops the remote control, which lands on the ground upside down. The vacuum responds to the signal it gets from the remote control and shuts down in mid air. It crashes to the ground and breaks. Pingu blames himself for everything, but he is comforted by Pingj and they both go up to the vacuum, the remote control is handed to Pingu and Pingj puts back the broken bits of the vacuum and rummages inside, removing the bouquet, which is in pieces, in the process, however not upsetting the bride. Pingu then tries the remote. The vacuum now works properly, and they’re congratulated.

Robby takes a photograph of the wedding party, but the camera falls and the film burns, almost blowing himself up with the flash in the process, and the bride and groom leave on a sledge. All the guests wave goodbye. Then farewells are made, but Pingu doesn’t want to leave Pingj. Pinga tries to get Pingu to come, but he won’t. Pingj eventually goes with Pingu’s family, and they ride off happily together towards the setting sun.

one of the figurines has a missing beak

UK Disc
Add a photo to this gallery

VHS Title card
Add a photo to this gallery 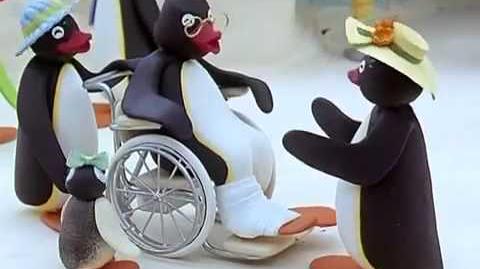 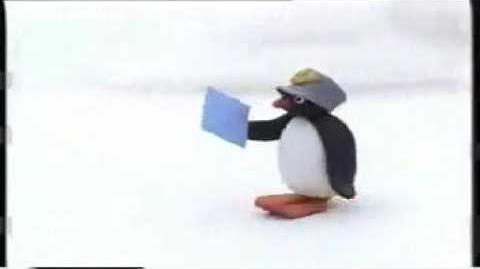 ピングーと結婚式 短縮版
Rare 5 Minutes Version
Add a photo to this gallery
Retrieved from "https://pingu.fandom.com/wiki/Pingu_At_The_Wedding_Party?oldid=28838"
Community content is available under CC-BY-SA unless otherwise noted.