Pingu is a British-Swiss stop-motion claymation children's show created by Otmar Gutmann. The main character is a penguin called Pingu, who lives in the South Pole along with his family & friends.

The show was produced by Trickfilmstudio Otmar Gutmann, later known as the Pingu Filmstudio and Pingu Studio in 1990-2000. HiT Entertainment and Hot Animation took over these roles in 2003.

In the early 1980s, Otmar Gutmann worked in his small film studio together with the graphic artist Harald Mücke in a competition to produce television advertisments. One of their shorts was Hugo. Gutmann decided to make more out of it, so he pitched a pilot to Swiss television DRS, under the name "Pingu: A Pre-School Children's Story ", in 1986. The pilot was accepted by the publisher and it became a full series, the first few episodes were produced in the late 1980s are the series itself premiered on March 7, 1990. The pilots were later released on DVD as bonus features on Japanese DVD releases. The series was animated using a combination of clay animation to animate arm and head movement, and replacement animation to animate mouth and leg movement.

The show was broadcasted on SF DRS and RTSI in Switzerland.

Carlo Bonomi originally did all the voices in the first four seasons and Marcello Magni and David Sant took over until the last episode to date.

In the mid 1990s, due to the new soundtrack and voicing made for Season 3, Seasons 1 and 2 were redubbed and were given new music, these versions of the show started circulating outside of the United Kingdom, and became more common in the early 2000s when HiT Entertainment purchased the show.

In 1997, the first and only Pingu TV special was aired, Pingu at the Wedding Party, the special is about Pingu going to one of his cousins' wedding, it marked the first time Carlo Bonomi had somebody else voice as well as him, and also has a soundtrack composed by Andy Benedict, it was later released on DVD in 2004.

On 29th October 2001, Hit Entertainment bought the rights to The Pygos Group for over £15.9m. At the same time, Season 5 and 6 were green-litted and they were produced by Hot Animation. They needed someone who could speak Penguinese as well as Bonomi did, so David Sant sent to they his CV. He shared Pingu with Marcello Magni, who also had a background in physical theatre. Steve Cox went over to Gutmann’s studio in Switzerland and brought back everything they could find, right down to Biros that had run out. The puppets were all in abysmal condition, so they made moulds and recast them out of resin. Replacement animation became the main technique used for these two seasons fully replacing the claymation.[1]

The new series was also shown on BBC, and lasted for 2 seasons, after the airing of the Season 6 episode Pingu and the Abominable Snowman, Pingu ended abruptly without any announcement.

The show was succeeded by The Pingu Show, an anthology television series in which Pingu lives in his secret whale-shaped funhouse. It was packed with brand new sketches, two classic episodes from Pingu and Penguin Facts with Professor Pingu, the chance to learn more about the amazing world of penguins. It was narrated by Marc Silk. It had in total of 78 episodes.[2]

In 4th September 2017, NHK announced that Pingu will be returning to television for the first time in ten years, on a new television series called Pingu in the City, airing in Japan on October 7th, 2017.[3] The series is made by Polygon Pictures.

Pingu in the city ended on March 30th 2019 with it's last episode being Pingu the Conductor.

The main characters who are in the the series are.

Main article: Pingu around the world

Pingu has been broadcasted in several countries and on different channels since its debut.

Pingu received mainly positive reviews from both critics & audiences, Common Sense Media gave the show a 4 out of 5 saying "Parents need to know that this claymation series is funny, endearing, and entertaining. Although the series is appropriate for all ages, the plots might be difficult for the youngest viewers to follow".[4] Also in recent years Pingu has obtained a major cult following.

This section is under construction. You are welcome to assist in its construction by editing it as well. 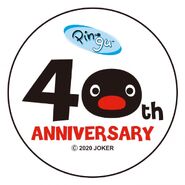 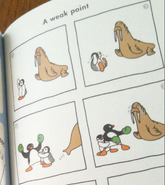 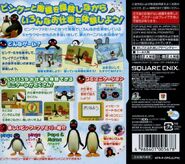 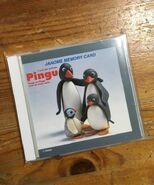 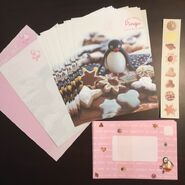 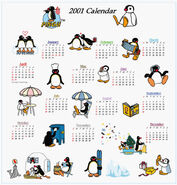 Retrieved from "https://pingu.fandom.com/wiki/Pingu_(TV_series)?oldid=30778"
Community content is available under CC-BY-SA unless otherwise noted.