Pingu's Igloo is where Pingu and his family live in from seasons 1-6 before they moved into the city.

This contains the kitchen, dining and seating areas of the igloo. In the seating area above the toybox there is a painting of a seal, as well as a telephone. Said toybox is where Pingu and Pinga's toys are located. During the first series, there was a picture of a penguin with glasses next to the coat hanger.

This room contains two beds, a lamp, two paintings (a whale and a seal) and a single bedside cabinet. There is also a window which played a role in two episodes, Pingu Quarrels With His Mother and Pinga's Lost Rabbit. There is also some random junk which caused scary shadows in Pingu's Bedtime Shadows in the corner, as well as some cupboards.

The bathroom is very simple, it contains a toilet, a bath, a sink and a mirror.

This room is different in appearance in the video games compared to the show. It contains a double bed, two cupboards and depending on the media, a pink and love motif. 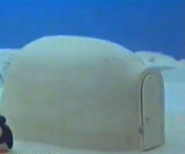 Pingu's Igloo in Pingu in the City

Add a photo to this gallery
Retrieved from "https://pingu.fandom.com/wiki/Pingu%27s_Igloo?oldid=27725"
Community content is available under CC-BY-SA unless otherwise noted.