Pingu's First Kiss is the fifth episode of the second season which was first broadcast on January 19, 1992.

Pingu and his friends Pingg, Pingo, and Pongi are doing some tricks on skates, when his girlfriend Pingi comes along. Pingu greets her by kissing her on the hand and the other three tease him and laugh at him. Annoyed, Pingu tries to show them he is not a softy and then impresses them all with the best ice jump they have seen all day. Pingi applauds and suggests to Pingu that they go off together, but Pingu’s friends want him to stay with them.

Pingi goes off, but Pingu is not sure what to do. He goes back to his friends but then pretends to go home and while Pingo tries a new trick with the other two watching him, he sneaks away to join Pingi. Together, Pingu and Pingi gracefully do some ice skating dances. Part way through, they try to have their first kiss, but Pingg, Pingo, and Pongi keeping skating up behind them, teasing Pingu. Pingu and Pingi skate away from them and soon manage to hide from them behind a pillar of ice. Pingo, Pingg, and Pongi skate right pass and with them out of the way, Pingu and Pingi finally manage to have their first kiss. Pingo, Pingg, and Pongi soon find them and Pingu and Pingi impress them with some more of their figure skating. 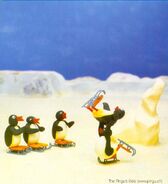 Another Rare Photo
Add a photo to this gallery

Retrieved from "https://pingu.fandom.com/wiki/Pingu%27s_First_Kiss?oldid=27657"
Community content is available under CC-BY-SA unless otherwise noted.