Pingu at the Funfair
Pingu's Birthday is the is the fifteenth episode of the second season which was first broadcast on July 6th, 1993.

It is Pingu’s birthday today and many of his friends and family have turn up for a big party. The party area at the front of Pingu's igloo is decorated with balloons and lights and a huge snow table is laid with snacks and drinks for everyone. Grandpa is also providing the party music on his accordion.

After listening to Grandpa playing a tune on his accordion, Robby arrives at the party with Pingu's present. It is a cap, which Pingu promptly puts on and now he has his own party hat like everyone else. Pingu shows off all the other presents he received that day and then they all tuck in to the party food. There is a nice selection of bread sticks, potato crisps and many different flavours of fruity drinks.

Now it is time to play the games. Pingi pulls Pingu’s cap over his eyes, ready to play "Blind Man's Bluff". Everyone call and make noises and Pingu follows the sound, but just as he reaches for them, they all silently move out of the way. At one point, Pingu tries to go for Pingi, but she moves out of the way and he walks up to his mum instead, who has just come outside to look in on the party. She takes Pingu's hat off so that he can see who he has found and then puts it back on again, pleased to see how much fun he is having. The game continues, Pingu goes after Pingo, who backs away towards Grandpa. Just as Pingu reaches out for Pingo, he runs away and Grandpa sounds his accordion. Pingu chuckles and then goes for Pinga, who quickly runs away Pingu ends up reaching out for a fruit juice.

Now it is time for the cake which Mum made herself. Pingu blows out the snowman candle and Pinga, Robby, Pingi, and Pingo all sing “Happy Birthday” to him. A slice of cake is given to everyone and as Grandpa plays another jolly tune on his accordion, all the guests thank Pingu for such a wonderful party and Pingu thinks what a happy birthday it is for him after all. 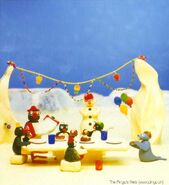 Another Rare Photo
Community content is available under CC-BY-SA unless otherwise noted.
Advertisement