Pingu at the Doctor's

Pingu and the Seagull

Pingu's Admirer is the second episode of the second season which was first broadcast on November 4, 1991.

Pingu is reading a book, when Mum comes out and tells him it is almost time to go to school. Pingu however resumes reading his book, but Mum tells him to hurry up and pack everything away. Pingu wants to take his book with him, so after packing his bag and saying goodbye to Mum, he sneaks back and puts the book inside the bag.

On the way to school, he meets Pingg, Pingo and Pongi playing a long pole. Pingo and Pingg hold the pole at both ends and Pongi jumps over the bar, falling flat on his bottom on the other side. Pingu decides to limbo underneath the bar, he dashes forward and slides cleaning underneath to his friends' delight. Mr. Peng-Chips then rings the bell for the start of class.

As the lesson starts, a new student arrives. The new student is a girl penguin named Pingi. Mr. Peng-Chips greets Pingi, and he finds a place for her to sit. Unlike his friends, Pingu is completely uninterested in her. He spreads out his things all over his desk and puts his legs wide apart to make it seem as though there is no room at his desk. He is infuriated when Mr. Peng-Chips picks his seat anyway. Pingo offers Pingi a lollipop, which she takes and then offers to Pingu. Pingu refuses, so she gives it back to Pingo. Pingi then draws a heart shape for Pingu, but he just snaps at her, earning himself a stern ordering from Mr. Peng-Chips to be nice to her.

On the way home after school, Pingi follows Pingu and wants a hug from him. Pingu just lets her have a piece of his mind and that makes her cry. Pingu walks away and Pingi throws a snowball at him. Annoyed, Pingu throws one back in retaliation and it smashes through the window of a nearby igloo. He and Pingi both hide in a barrel to escape the wrath of the igloo's irate owner. Once the coast is clear, Pingu and Pingi climb out of hiding and they head off for home.

By the time they have to go their seperate ways, even Pingu has by now developed a soft spot for Pingi aswell and he even sheds a tear when they have to part.

Pingu and Pingi hiding the barrel 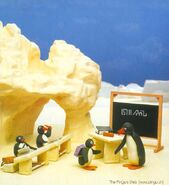 Behind the Scenes
Add a photo to this gallery
Retrieved from "https://pingu.fandom.com/wiki/Pingu%27s_Admirer?oldid=25263"
Community content is available under CC-BY-SA unless otherwise noted.