Pingi is Pingu's love interest, but Pingu was not so keen on her to start with.

She first appeared in Pingu's Admirer. When she was first introduced at South Pole Public School, Mr. Peng-Chips greets her, and he finds a place for her to sit. Pingu was not interested in her, as he spread out his things all over his desk and puts his legs wide apart to make it seem as though there is no room at his desk. Mr. Peng-Chips picks his seat anyway, much to his disdain. Pingo offers Pingi a lollipop, which she takes and offers to Pingu, but he refuses, so she gives it back to Pingo. She then draws a heart shape and offers that to Pingu, and he snaps at her, earning himself a reprimand from the schoolmaster, who firmly orders him to be nice to her.

On their way home after school, Pingi follows Pingu and wants a hug, however, when Pingu lets her have a piece of his mind, she cries. Pingu walks away, and Pingi throws a snowball at him. He throws one back in retaliation, but it goes through the window of a nearby igloo. Pingu and Pingi both hide in a barrel to escape the wrath of the igloo's irate owner, and they end up falling in love and they eventually start a relationship.

Pingi is one of the kinder penguins, she is a kind lover and isn't very naughty. Pingi is not as adventurous as Pingu and she will only get herself into trouble or discover new things if Pingu has dragged her into it. When Pingu is around, she is happy to take a backseat in the action, but has a tough nature and an ability to stand up for herself if she needs to.

She also appeared in Eskimo Disco 7-11

Pingu and Pingi in "Green-Eyed Pingu" 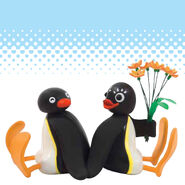 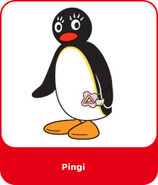 Wallpaper
Add a photo to this gallery
Retrieved from "https://pingu.fandom.com/wiki/Pingi?oldid=28350"
Community content is available under CC-BY-SA unless otherwise noted.