Pinga is cuddling her toy rabbit. Pingu offers her his teddy in exchange, but she doesn’t want it. Pingu sneaks up and takes the rabbit, and then teases Pinga by keeping it just out of reach. Pinga cries, and Pingu thinks it’s a huge joke, but he’s not so happy when Pinga starts jumping up and down on the teddy. He tosses the rabbit away, and it lands on the windowsill. Pinga screams, and Mother and Father come in to find out what is going on. Pingu denies any wrongdoing on his part, but is told to go and get the rabbit. As he’s going to the window he trips and knocks the rabbit out of the window. Pingu is told to go and get it back and, rather reluctantly, he goes outside to get it. He tosses it into the air and it lands on the sledge, but as Pingu goes to get it from the sledge he trips again and knocks the sledge away. The sledge doesn’t stop so Pingu goes after it, following the tracks it’s made in the snow. When at last he catches up he finds that Robby has now got the rabbit. Robby won’t give it back, and he does to Pingu what Pingu was doing to Pinga, keeping the rabbit just out of reach as Pingu tries to get it. When Robby finally flips it away Pingu follows it, but he can’t find it anywhere. He’s about to give up when he sees it drifting away on an ice floe. Fortunately, there’s a fishing rod leaning against the wall of a nearby igloo, and he uses the rod to catch the rabbit as it drifts past. He returns triumphantly home, but Pinga is now happily playing with the teddy, which is on a chair being offered a pretend cup of tea. Pingu offers her the rabbit, but she doesn’t want it, so Pingu sits it on a nearby chair and goes away. 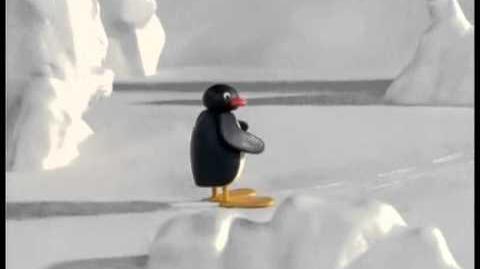 108 Pinga's Lost Rabbit.avi
Add a photo to this gallery
Retrieved from "https://pingu.fandom.com/wiki/Pinga%27s_Lost_Rabbit?oldid=26445"
Community content is available under CC-BY-SA unless otherwise noted.