Pingu and the Barrel Organ

Pingu and Pinga at Home

Noise (also known as Pingu and His Friends Play Too Loudly) is the twenty-fourth episode of the first season of Pingu.

Pingu and Pingg are playing hopscotch, not knowing they are doing it in Father's parking space outside his igloo. When Father comes home and parks it in there, Pingu and Pingg start shouting at him to no avail, he then proceeds to scoot off the hopscotch markings, which causes Pingu to try and tell him off, but Father questions Pingu why he even put it there in the first place and proceeds to draw a border around it and places a parking sign, resulting in Pingu and Pingg heading off somewhere else to play.

They eventually come across a yard, where Pingg proceeds to entertain Pingu by dancing around, but then Mrs. Peng-Sniff pops her head out one of her windows and starts yapping at them about their noise very loudly. Pingo then comes along and thumbs his beak at her. She threatens to hit them with her carpet beater, so the three leave as she misses with it. She leaves and accidentally closes the window on her wing, making her cry out loud in pain, and making Pingo, Pingg and Pingu laugh. They then start playing ball, and Pingg accidentally bounces the ball onto Mrs. Peng-Sniff's roof where it bounces up and down again and again.

Mrs. Peng-Sniff comes crossly outside, catches the ball and then takes it inside her igloo. Pingo and Pingg protest to tell Pingu (because he is more polite) to go and get the ball back so he begs for it back to no avail. He rings at the door again, but Mrs. Peng-Sniff just pushes him off. Then Pingu throws a snowball at the doorbell and they run away to let the bell ring on and on. Mrs. Peng-Sniff runs out to chase them off and removes the snow, but accidentally gets herself locked out of her own igloo in the process. The young penguins look back and laugh to see her yanking at the door and then squeezing through the window to get back in. Pingu decides to help her, by climbing in through the window himself and unlocking the door from the inside. Mrs. Peng-Sniff is so grateful, she gives the young penguins their ball back, and they all play together. Mrs. Peng-Sniff decides to join in, but accidentally hits the ball onto her window and breaking the glass which is enough to make any young penguin laugh. 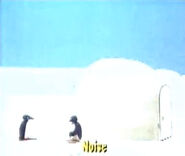 Mrs. Peng-Sniff gets locked out

Mrs. Peng-Sniff is nice for once

Retrieved from "https://pingu.fandom.com/wiki/Noise?oldid=28005"
Community content is available under CC-BY-SA unless otherwise noted.