While Mother watches Father making a cake, Pinga is playing her bugle. At this Pingu gets out his accordion and makes an awful noise. Then when Pingu starts using it like a yo-yo, Mother sends Pingu outside despite how much Pinga enjoyed it.

Meanwhile, Pingu sees some penguins talking. He tries to play his accordion again, but they all flee and lock themselves in their igloos at the sound of it. Eventually, Pingu arrives at Grandpa's igloo to find him playing his own accordion. Pingu is amazed at how well he does it. Grandpa greets Pingu with a welcoming tune and asks him to do like-wise. At the piercing noise that follows, Grandpa offers to give Pingu some music lessons and they soon become as good as each other and are playing perfectly together.

Pingu then goes home to play his accordion with his family and surprises his parents with his perfect playing. They like the tune so much, Pinga taps her potty to the beat with a stick, and the parents clap. Pingu feels very happy indeed. 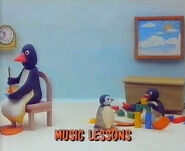 Pingu learning how to play his accordion

Pinga taps her potty to the beat of Pingu's accordion

Pingu's family to the beat of the accordion

Retrieved from "https://pingu.fandom.com/wiki/Music_Lessons?oldid=28320"
Community content is available under CC-BY-SA unless otherwise noted.