Mister Donut (ミスタードーナツ Misutā Dōnatsu) is a fast food franchise founded in the United States in 1956 and now headquartered in Japan, where it has more than 1,300 stores. The primary offerings include doughnuts, coffee, muffins and pastries. In 2010, there was a campaign to sell Pingu tote bags made by Mottainai. Another campaign was in the late 90s. 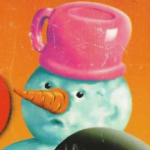