Jealousy (also known as Pingu is Jealous) is the sixth episode of the first season of Pingu.

Pingu, Pinga and their mother are having a quiet day inside. Pingu is building towers with blocks, but they keep falling down, much to his dismay. Meanwhile, Mother lays Pinga down in her cradle and rocks her to sleep. Pingu goes to his mother for help with his blocks, but she is too busy knitting clothing for Pinga.

When Pingu goes over to Pinga, she wakes up and begins to cry. Mother comforts her and plays with her, much to Pingu's annoyance. Pingu desperately tries to get attention by acting like a baby, jumping up and down on Pinga's bed, putting the chamber pot on his head and banging it with a spoon, wearing the bedsheets on his head and pretending to be sick. Mother just ignores him and keeps playing with Pinga.

Pingu eventually gives up and climbs into the toy chest, feeling miserable. Realising how sad she has made Pingu, Mum apologises and hugs him, and he falls asleep with Pinga.

Pingu playing with his blocks 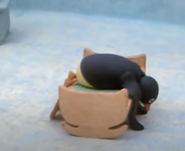 Canadian VHS Title card
Add a photo to this gallery 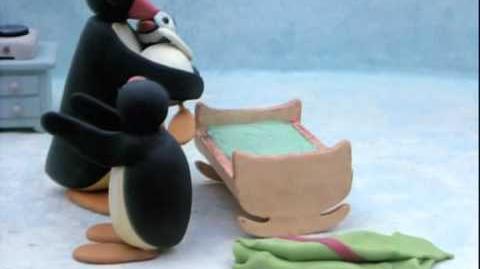 Jealousy
Restored Version
Add a photo to this gallery
Retrieved from "https://pingu.fandom.com/wiki/Jealousy?oldid=28489"
Community content is available under CC-BY-SA unless otherwise noted.