Hide and Seek (sometimes known as Pingu and the Snowball Fight) is the seventh episode of the first season of Pingu.

Pingu goes out to play on his sledge and meets up with Robby. The two of them soon arrive at an old ruined igloo and they play a game of hide and seek in and around it, followed by a snowball fight. Hiding behind the wall of a nearly crumbled igloo, Pingu tricks Robby by making a model of his own head out of some things bits of blubber that was left lying. Putting the head on the end of a stick, Pingu sticks it above the ruins and Robby throws a big snowball at it. The head falls off the stick and splats all over the ground. Robby realises he has been tricked and calls for his friend, who sneaks up behind him in a barrel and throws a snowball at the wall, nearly hitting the seal. Robby soon spots Pingu taunting him, and chases him. Pingu suddenly slips out of his barrel and runs to the top of a ruined igloo to get away from  Robby. The seal tries to use the barrel to catch up with Pingu and hurts himself in the process. Robby clutches his hurt head and begins to cry. Pingu feels sorry for the poor seal and tries to cheer him up with some of his famous funny moves and postures. It is only when Pingu starts doing the hoola-hoop dance with the ring of a barrel, that Robby forgets about the pain in his head and joins in with his friend's new game for the rest of the day. 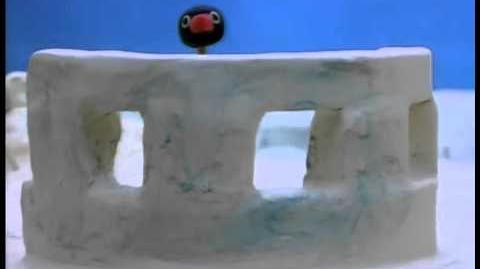 Hide and Seek
Restored Version
Add a photo to this gallery
Retrieved from "https://pingu.fandom.com/wiki/Hide_and_Seek?oldid=27894"
Community content is available under CC-BY-SA unless otherwise noted.