Hello, Pingu (also known as Pingu is Introduced) is the very first episode of the Pingu series.

Pingu and his family are eating dinner. Pingu eats in a rather messy way, smashing his fork so he can scoop up his potatoes, blowing bubbles in his milk and sticking his entire fish in his mouth. He then leaves to play with his toys, but his father forbids him from leaving until he eats his greens. So Pingu sucks them up through his straw, rushes to the bathroom and spits the greens into the toilet.

After he is excused, Pingu climbs into the toy box and finds his red ball inside. He asks Father to inflate it for him, so he fetches the pump and does so. Pingu finally goes outside with his ball, but then sets it down and goes back inside to blow his nose. While Pingu is gone, Pingo and Pingg find his ball and run away with it.

Pingu returns and chases after the pair, trying to retrieve his ball. He eventually finds them tossing it back and forth. After some fighting which leads to Pingu tripping over his ball and bursting it, he runs home as Pingo and Pingg pummel him with snowballs. Back home, Mother bandages up his head and Father fixes his punctured ball. Pingu then finishes the day off with a rest in his hammock. 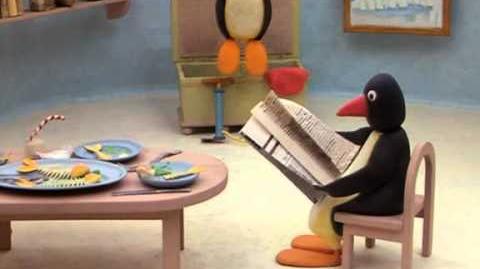 Retrieved from "https://pingu.fandom.com/wiki/Hello,_Pingu?oldid=28829"
Community content is available under CC-BY-SA unless otherwise noted.