Start a Wiki
Golden Bear Products Ltd. was formed in 1979 by John Hales and Christine Nicholls. Golden Bear operates from its headquarters in Telford, Shropshire and opened an office in Hong Kong in 2001. In 1992 they had owned the rights to produce Pingu figures. In Japan, the figurines were released by Bandai . 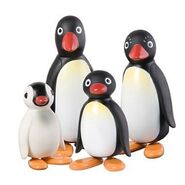 Add a photo to this gallery
Retrieved from "https://pingu.fandom.com/wiki/Golden_Bear_Toys?oldid=22170"
Community content is available under CC-BY-SA unless otherwise noted.