Bandai Co. Ltd. (株式会社バンダイ Kabushiki-gaisha Bandai) is a Japanese toy maker and former video game company, as well as the producer of a large number of plastic model kits. It was the world's fourth-largest producer of toys (after Mattel, Hasbro and The LEGO Group). Some ex-Bandai group companies produce anime and tokusatsu programs. Its headquarters is located in Taitō, Tokyo.

They have produced a variety of Pingu toys since 1993.

The first Pingu product produced by Bandai from 1993

The Japanese release of the Pingu Golden Bear Toys figurines 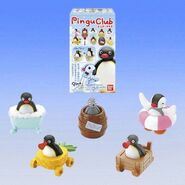 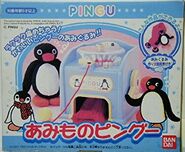